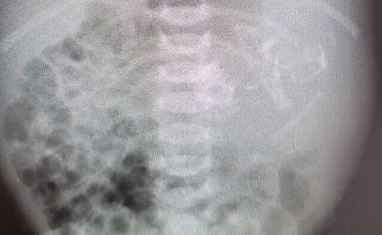 "We were surprised to discover that it was an embryo," Omer Globus, director of neonatology at the hospital, told the paper.

Medical checks and ultrasound examinations of the mother already showed that the developing baby’s stomach was enlarged, and doctors later confirmed the unusual condition after the child was born, the report added.

After birth, the baby underwent furter ultrasound examinations and an X-ray,and doctors had to remove two more formations from inside the baby, the report said.

The operation was successful and the girl is expected to make a full recovery, Globus said. Both the girl and her mother, who has three other children, have already been sent home.

Globus said there are a number of theories as to how such cases occur, with one being that the pregnancy starts off as twins but then one of the embryos is absorbed by the other.

“It happens as part of the fetal development process when there are cavities that close during development and one of the embryos enters such a space,” he said.

“The fetus inside partially develops but does not live and remains there.”

North Is Rich, We Do not Need South VAT Billions – Baba-Ahmed

Oh No! Woman Falls Ill On Board And Dies On Arrival As Flight Makes Emergency Landing

Buhari Govt Has Refused to Help Me – Gov Ortom Cries Out