Appointing Lauretta Onochie Who Is The Presidents PA As INEC Commissioner is Wrong - Aisha
Total Members : 204,233
Thursday 24th of June 2021

The Senate has been urged not to make the mistake of confirming Lauretta Onochie as a commissioner of the Independent National Electoral Commission.

The warning was given by activist, Aisha Yesufu. She said such a move is wrong considering that Onochie is a special assistant to President Muhammadu Buhari on Social media.

Recall that the Senate had on Wednesday sent the names of Onochie and 5 others to the Senate committee on INEC headed by Sen. Kabiru Gaya for screening and possible confirmation.

Reacting via Social media, Aisha stated; “Lauretta Onochie as INEC Commissioner is as wrong as wrong can be. She is APC member. If this is allowed then expect Garba Shehu as INEC chairman”.

“The senate has rejected her before and now it is time for the senate to reject her again. The opposition party in the national assembly should oppose this even if members of the ruling party want to install their own. This is not the way things are going to be done”.

“If she gets into office, next thing, we can have someone like Garba Shehu appointed as INEC chairman”, she said. 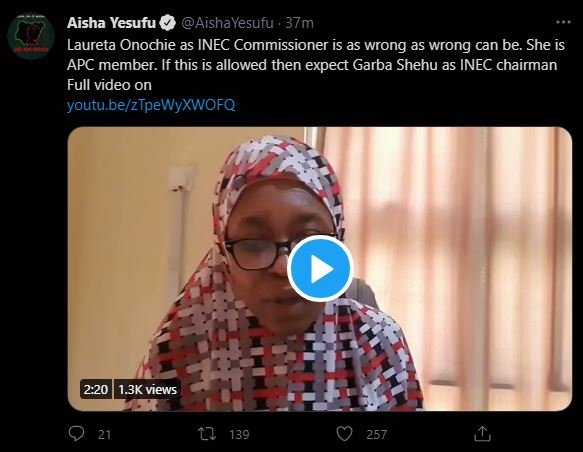 Air Strikes In Orlu: They Have Finally Brought The War Upon Us - IPOB