The thespian has mandated Davido to marry Chioma. He said that is the only way God will expose all the wickedness around him is if he goes ahead to marry Chioma within 21 days.

Recall that yesterday, Davido reacted to a viral video in which a clergyman prophesied that the singer would to be poisoned by one of the boys close to him.

Reacting to the prophecy, the singer wrote;

''God will expose and deal with any wickedness around me near or far....I'm blessed''

Uche in a post shared on his IG page this afternoon said the only way for God to remove any wickedness around the singer is for him to marry Chioma within 21 days.

''Dear Davido, stop being stubborn like #Buhari, marry Chioma within 21 days if you want God to expose all the wickedness around you this new prophecy just came in now because of all the prayers nigerians offered on your behalf. There is no wickedness greater than promising a woman #marriage only to make am Lord of engagement ring, give am belle and after she born, you still no marry am, oga your 30BG wickedness dey choke'' 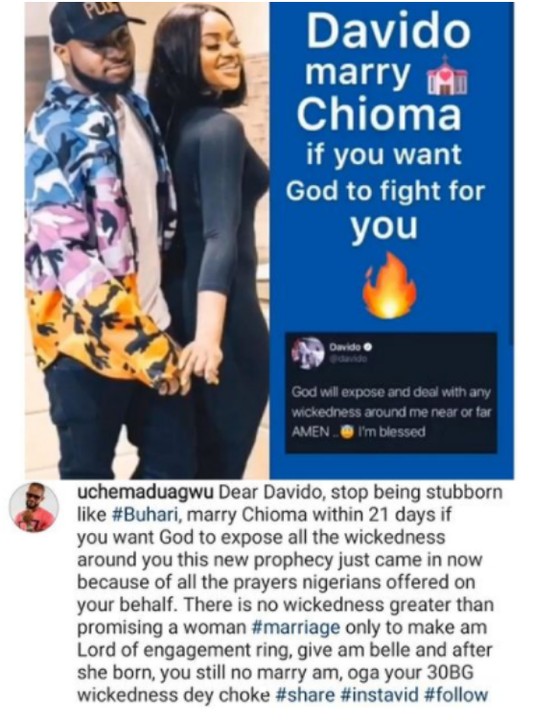 Stop Attaching Too Much Importance To Marriage, It Is Not A Big Deal – BBNaija Housemate, Tacha Warns Women